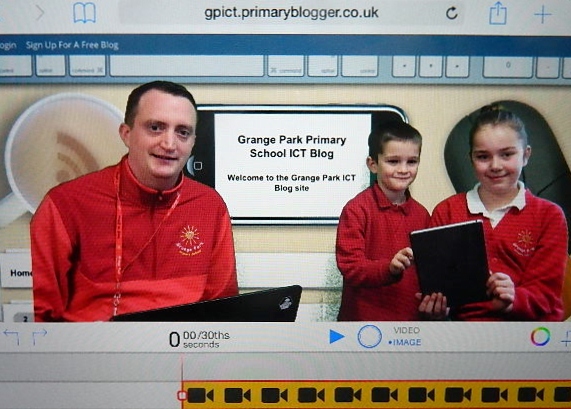 Bloggers at a Telford primary school have been shortlisted for two national awards – less than a year after launching its inspirational blog.

The popular ICT Blog at Grange Park Primary School, in Stirchley, is regularly updated and widely read by pupils and their parents. Other schools, both locally and further afield, are also regular visitors to the blog to pick up ideas.

Staff at Grange Park are delighted to have now received national recognition having been shortlisted in both the Education and Digital & Technology categories for the UK Blog Awards, which take place in London on Friday, April 29.

Lisa Dugmore, the school’s business manager, said: “We’re incredibly proud to go from zero blogging to being up for two national awards in less than 12 months. It’s a real achievement.

“To be nominated is just fantastic. If we were to win that would just be the icing on the cake as this is a national competition.”

Grange Park’s ICT Blog was one of about 150 originally nominated in the Education sector before the school was told they had made it through to the top ten in two different categories following a public vote.

Lee James, the head of social media at the school and responsible for the blog, said: “We were really happy to be in the top ten for the Education section and then even more pleased when we found out we were also in the Digital & Techonology section.

“It was suggested when I came into the role that we set up an IT blog just to promote what we do in school, and since then we have added to it.

“Lots of other schools now comment on our blog and look at what we’re doing. I’ve been told they’re looking at our ideas with a view to implementing them in their own schools, which is great.”

Mr James added: “What was originally going to be a blog to just show parents at home what’s going on in school is spreading much further afield now and people are contacting us from all over the country asking us how we have done certain things.

“The blog is just another way to let parents know what we’re doing, it’s a fantastic way to keep them updated, and the children also really engage with it.”

Grange Park’s ICT Blog has attracted 1,200 unique hits from across the world while the school’s special Christmas video received more than 7,000 views.

The UK Blog Awards provide a unique opportunity for individual professionals from their sector and organisations to be recognised for their social media achievements through blogging.

You can view the Grange Park Primary School blog by visiting http://gpict.primaryblogger.co .uk/