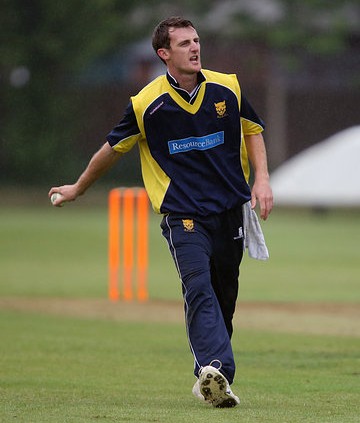 Richard Oliver, Shropshire’s former captain, is delighted to have returned to the county on the eve of the new Minor Counties cricket season.
Oliver, an explosive opening batsman, has spent the last two summers in the first-class game with Worcestershire. He left the New Road club at the end of last season and, after spending the English winter playing for Geelong City in Australia, he’s now looking forward to representing Shropshire again.
The 26-year-old has initially agreed to play for the county in their four group matches in the Unicorns Trophy, beginning with the clash against Herefordshire at Shrewsbury’s London Road ground next Sunday, April 24.
His signing is a coup for Shropshire, with officials pleased to have the popular Oliver – who is excited to be linking up at the top of the batting order once again with new county captain Steve Leach – back on board.
Oliver said: “It’s the right place at the right time for me and it’s the right place at the right time for Shropshire, so I think it’s a fantastic fit – it always has been – and hopefully we can do something special.
“It’s going to be great to go back and play for Steve Leach, who was very loyal to me when I was captain, so I can hopefully be in a position to repay some of the loyalty that he gave me and make sure that we can progress through the group stages initially.
“I think we’re going to have a very exciting team. I presume that availability’s going to be good for the one-dayers and if we can emulate some of the success that I’ve had with Shropshire in the past then that will be fantastic.”
Oliver, who first played for Shropshire at under-12 level, progressed to the first-class stage with Worcestershire after impressing as a prolific run-scorer, both in club and Minor Counties cricket.
He broke through to Worcestershire’s first team with some eye-catching displays in T20 cricket and then started to hold down a regular place in their County Championship side, scoring two first-class centuries against Gloucestershire and Sussex.
He added: “It’s been unbelievable really, the last two years, and it’s flown by. A lot’s happened and it’s mostly been on the good side.
“Some of the experiences I’ve had have been fantastic, playing in front of big crowds at big grounds with the biggest players. It’s been a fantastic experience and hopefully it’s not a journey that’s finished just yet at that level of cricket.”
But, for the time being, it’s all about doing well for Shropshire, with Oliver insisting: “We’re all pretty excited about it – I’m certainly looking forward to it.”
Pictured: Richard Oliver – looking forward to playing for Shropshire again.
http://stuartdunnsportandpr.com/wp-content/uploads/2016/04/Richard-Oliver-T20-pic.jpg 449 360 Stuart Dunn http://stuartdunnsportandpr.com/wp-content/uploads/2014/06/SD-Logo-Light-367x120.png Stuart Dunn2016-04-16 08:44:402016-04-15 20:52:45Former captain Oliver looking forward to shining for Shropshire again

Remember when Somerset’s stars visited Wellington and Shropshire’s Brian Perry was named man of the match?