Leading Shropshire chartered surveyors Towler Shaw Roberts have been chosen to undertake a notable project in London as their impressive reputation continues to be recognised across the UK.

It is the latest national project to be awarded to TSR, an established company with offices in Shrewsbury, Telford and Wolverhampton.

Toby Shaw, a partner for TSR, said: “We have just been appointed by an international company to undertake 12 building surveys of large commercial industrial buildings in and around the Greater London area as part of a major investments sale.

“This demonstrates our depth of expertise which we are able to offer at TSR and it follows on from similar work we’ve undertaken for this client in Cumbria, Kent and the West Midlands, while we’ve carried out work for them in Europe.

“The fact that we are going to Greater London and that Chris has previously been over in Europe – he’s done two big surveys in Amsterdam – is great news for us. This is work that national firms would ordinarily get.”

The London appointment follows on from a recent project successfully completed closer to home for the Black Country Chamber of Commerce.

Mr Shaw added: “Chris completed a piece of work for the Black Country Chamber of Commerce, an internal refurbishment of offices in Walsall town centre with very tight timescales. The whole scheme was completed within a two-week period.

“This is a department that we’ve expanded and we’re now getting this quality of work.

“What people are demonstrating with TSR is that they are impressed with the very high quality of what we do.”

Pictured: Chris Hedley, from Towler Shaw Roberts, who has been asked to complete 12 building surveys in London. 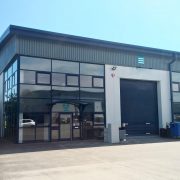