Hundreds of cyclo-cross riders of all ages are heading to Shrewsbury this weekend to take part in a prestigious regional event.

Round two of the West Midlands Cyclo-Cross League at the Shrewsbury Sports Village in Sundorne will serve as the ideal warm up ahead of organising club Mid Shropshire Wheelers staging the National Championships for the first time at the same venue early in the new year.

“We’re hoping that more people from the region step up and do the Nationals this time when we host them in January because it’s here and because they know the course. I’m sure riders will be keen to check out the course ahead of the Nationals.

“Anybody can ride this weekend and then for the National Championships we hope to get the best riders from all around the country together with both American-based and European-based pros who will all come back to ride so it will be really special.”

This Sunday’s action at the Sports Village starts at 10am with a junior race for under-sixes and under-eights. Various age classes will then be catered for leading up to the main senior race scheduled to get under way at 2pm.

Admission is free and organisers promise an exciting spectacle on a newly-designed two-mile course.

Organiser Dave said: “Cyclo-cross is absolutely fantastic. If you go to a race in Belgium, you get crowds of 10,000, 20,000 people paying to go and watch. It’s huge over there.

“We haven’t got to that yet here but cycling, as we’ve seen with some of the town centre circuit series races this year, is getting so popular and more people are wanting to get into it.

“This weekend’s course is about two miles long. It’s amazing really that in such a compact space we can get a course of that length. It takes about eight minutes to complete a lap.

“It starts on the cycle track and then we use the grass banks inside the cycle circuit. It then goes out round a couple of the football pitches and into the woods with spectators welcome to choose their favourite vantage point.”

Host club Mid Shropshire Wheelers will be well represented with hopes high that young Shrewsbury star Ewan Grivell-Mellor – who wants to emulate his brother, Luke, by being selected for the World Championships – can mount a strong challenge in the under-18s race.

Rebecca Woodvine, Mali Jones – who has won the under-14 league in the past – and Rhiannon Tansley are also expected to go well for MSW.

Dave added the club were delighted to have been chosen to host the National Championship for the first time with much excitement as the big date, January 9 and 10, moves ever closer.

He said: “It’s testament that we’ve got the National Championships to the club and to the venue. It’s really, really good. It underlines what a great club it is. We’re no strangers to national championships. We’ve had them for mountain biking, time trialling, the national hill climb championship. The venue’s fantastic and it is really the jewel in the crown.”

Dave York, the chairman of Mid Shropshire Wheelers, stressed he was delighted the club continue to attract such high profile events.

“The West Midlands League cyclo-cross event is always a highlight in the club’s calendar and a lot of work goes into it,” he said. “Dave Mellor and the team put a lot of work into getting the track ready and administering the entries.

“We want people to come along and watch, as they did for the Shrewsbury Grand Prix in the town centre. That was a good event for the town. We would love to get a lot of spectators and showcase the event as it’s exciting to watch, especially if the weather is a bit muddy.

“Sunday is an important event in its own right but we’re delighted to have been selected to stage the National Championships in January. To get that within five or six years of starting to promote cyclo-cross events is a really big accolade.

“Almost from the word go, it was recognised among the cyclo-cross community that Sundorne was a very good venue. It has a very good and flexible track with a lot of different terrain, but also the facilities the venue offers being a sports village is extremely good in terms of the car parking, the changing facilities, so it’s just a complete package really.”

Pictured: Ewan-Grivell Mellor, one of the Mid Shropshire Wheelers to look out for at the Shrewsbury Sports Village on Sunday.

Unique chance to play a game alongside Town legends 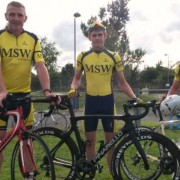