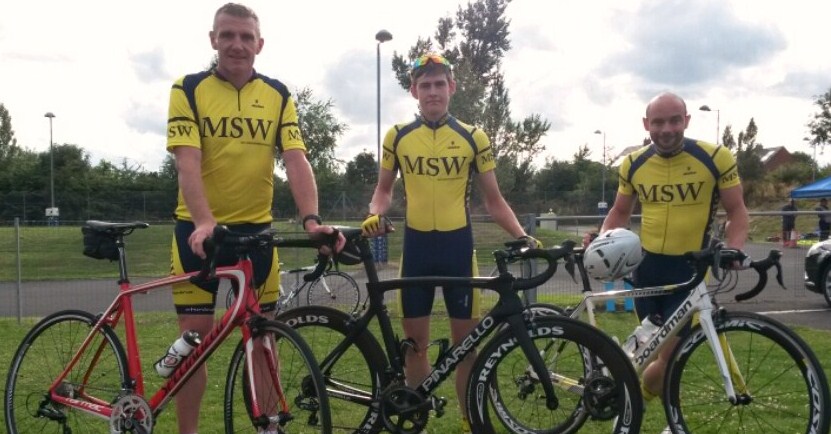 It’s proving to be an exciting 90th anniversary year for Mid Shropshire Wheelers as the club’s in-form cyclists produce a host of record-breaking performances.

No fewer than three club records have fallen in recent weeks, much to the delight of Dave York, chairman of the club based at the Shrewsbury Sports Village in Sundorne.

“The timing could not be any better in our anniversary season,” he said. “All the hard work that the coaches, committee and club members have put in over the years, particularly the last 10 since we’ve been able to use this facility at Sundorne, is now starting to really pay fruition.

“We’ve had a lot of success with our younger riders in recent years and then as they progress and other riders also join the club, you seem to get this critical mass of riders and success breeds more success.
“I don’t know whether they feed off each other or whether it’s just coincidence, but things seem to happen very quickly and we’re going through one of those periods at the moment when records seem to be tumbling quite regularly.”

Devon Round, one of the club’s rising stars, underlined his potential by twice breaking the MSW 25 mile time trial juvenile record for under-17s, most recently at the Vale of Neath in South Wales when he smashed the previous long-standing record of 58 minutes 31 seconds by nearly four minutes.

Having clocked 57:36 in the Shropshire 25 Mile Championships earlier this season, 15-year-old Devon surpassed that with a blistering time of 54:45 at Glynneath.

“I was pretty pleased as I understand the record had stood since the 1980s, so it was a good record,” said Devon, who will shortly head to Donegal to take part in the Youth Tour of Ireland and also has the National 10 Mile Championships and GHS 10 Mile Championships for juveniles to look forward to.

“Other clubs don’t really have a youth section whereas the Mid Shropshire Wheelers have a lot of youth members so you’re not on your own,” he added.

Club chairman Dave, a big admirer of the promising teenager, said: “Devon’s been going extremely well. Last year he started to show some real promise and do some really fast times – 54:45 is an absolutely astounding time for a 15-year-old. We’re really pleased for him and he’s doing himself and the club proud.”

They were in outstanding form at an event which started at Prees and took in Whitchurch, Market Drayton, Tern Hill, Hodnet and Shawbirch as they completed the course in a combined time of 12 hours 31 minutes and 36 seconds.

“The club’s 100 mile team record had stood since 1994, but Victor, Kirk and Simon took 18 minutes and two seconds off it in one slice on a day that wasn’t particularly kind weather wise,” said chairman Dave.

“Victor was second overall in the event and the first Shropshire rider so he’s the new 100 mile county champion with a time of 3:56:57. To get under the magic four hours meant he was faster than a 25 mph average speed.”

Delighted Victor, 37, from Wem, said: “I’m more of an endurance guy, but for the other guys it wasn’t really their event as they’re more speed specialists and do the shorter distances, so they both did really well.

Simon, 40, from Prees, added: “I’m really pleased to play a part in a record like that – next year we’ll hopefully try and beat it again.”

Kirk, 21, from Bettisfield, now wants to make it a double celebration as he is the current leader of the Edge Cycle Works Series at Marsh Tracks in Rhyl held over 25 successive Wednesday evenings between March and September.

“I’m leading the series by 17 points with eight rounds to go, so it’s a nice margin,” smiled Kirk, who has been cycling with MSW for five years.

Not to be outdone, Shrewsbury-based Tony Harvey broke the club’s senior men’s 10 mile time trial record for the second time, after clocking 19 minutes 39 econds at Hull.

“He previously held it at 19:54, an average speed of just over 30mph and he’s now lowered it again to 19:39,” said Dave, who enjoys his role as chairman of a thriving club.

“Tony’s been with the club for about four seasons now and he’s one of our short distance time trialists. He also managed to achieve another one of his targets by going under 53 minutes for 25 miles a week earlier, so he too is going really well at the moment.”

To find out more about Mid Shropshire Wheelers and how to get involved with the club, visit www. midshropshirewheelers.com